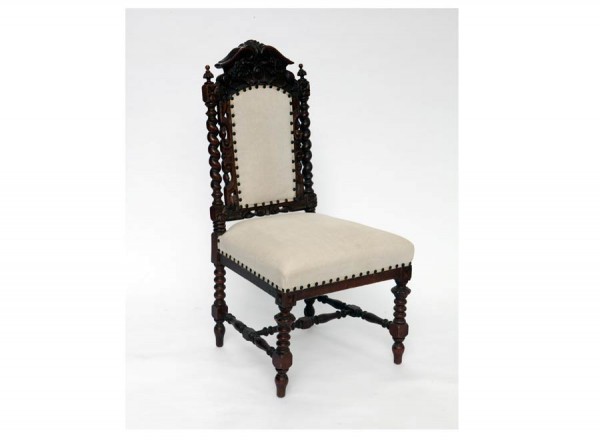 'A throne is only a bench covered with velvet.'  –Napoleon Bonaparte

You can't get much better than having your own throne chair at home. For those who like a little drama and extravagance, a throne is definately a good idea. It's an absolute statement piece. Even I couldn't resist a throne-like example in my home in the shape of an opulent gilded baroque chair lined in striped silk. Very flamboyant I know.  And flamboyant is this very grand English throne-chair in dark regal twisted oak; two lions guarding you on the crest and lined with rich taupe linen. You would certainly feel like a king or queen on this and imagine it paired with a minimalistic table or next to a midcentury reading lamp! You wouldn't know where to look first because this chair would complement all those styles.

Ps. Did you know he oldest surviving throne is one that was built into the walls of Knossos (c. 1800 bc), and probably the most splendid of thrones was the Peacock throne of the rulers of Delhi, set with jewels and raised on a dais with silver steps. The appearance of Christianity stimulated the production of thrones in Europe, for not only were they seen as part of the process of endowing kingship with a magical aura through the use of elaborate coronation rites but also many ecclesiastical dignitaries—cardinals, bishops, and mitred abbots—had a right to a throne. Some of the early thrones were incorporated into the stonework of the church, as at Torcello outside Venice; but the oldest, that of St. Peter, which became a symbol of the papacy and which dates from the 4th century ad, is built of oak and ivory and has iron carrying rings (it is now incorporated in a massive structure designed by the architect and sculptor Gian Lorenzo Bernini in the 17th century). (Source: Britannica.com)

Important Information:
If this item is reserved or unavailable we are entitled
to withdraw from the contract and you will receive an
immediate refund.